Pretzels are a popular and delicious snack, known all around the world. But where exactly did these uniquely shaped snacks come from? And who invented them? The answer is not straightforward, as the history of the pretzel takes many twists and turns.

The origins of the pretzel 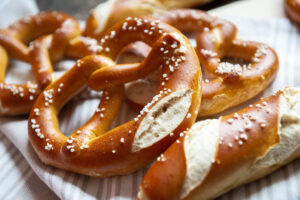 The specific origins of the pretzel is somewhat shrouded in mystery. There is a story told by the Catholic Church that the first pretzel was created by a monk in Northern Italy around 610 CE. The young monk was preparing bread for Lent and, using the dough left over, created the pretzel shape. The shape was meant to resemble the way Christians prayed with their arms folded across their chests. The monk named his creation “pretiola,” Latin for “little reward,” as they would be given to young children as rewards.

Unfortunately, this story is likely apocryphal. Despite it’s dubious origins, though, a snack similar to modern day pretzels began to spread around Europe during this time.

In 1510, the Ottoman Turks attempted to invade Vienna by digging tunnels under the city’s wall to get past the barricade. Nearby, however, monks were baking pretzels in the basement of their monastery. They heard the digging from the Turks and quickly alerted the city. Vienna was able to hold off the invaders, and the Austrian emperor gave the monks their own coat of arms as thanks.

Back in Germany, the pretzel became even more popular. It is why we often associated pretzels with this country today. By the 18th and 19th centuries, though, Germans were coming over to America in droves and they brought their knowledge of pretzel-making with them. The snack was featured in many bars and saloons where it became a hit with Americans. During the Prohibition, pretzels became even more popular as former bars turned their efforts away from alcohol and towards pretzels.

Today, pretzels are still a favorite snack among many Americans. It’s why shops like Uncle Henry’s Pretzels still exist. If you’re looking to satisfy your pretzel craving, then look through our online shop today!

Get Discounts Sent Straight to You! Sign up for our email newsletter to get discounts and promos throughout the year!
Uncle Henry's Pretzel Bakery

Get 10% OFF Your First Purchase!
Sign up for our newsletter & get 10% OFF your first purchase from Uncle Henry’s Pretzel Bakery. As a bonus we’ll send you additional discounts and promos throughout the year!